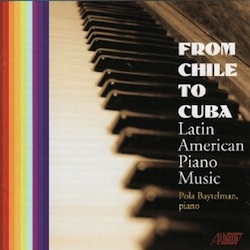 “An attractive feature of Baytelman’s program is that it rejects the boxes of nationalism, popular crossover, and avant-garde, or perhaps that it brings out this blurring of boundaries in the repertories she examines themselves. …

An excellent piece of performance investigation from an artist clearly immersed in the traditions on which she draws, and this is strongly recommended for those interested in Latin American concert music.”
—James Manheim, AllMusic Review